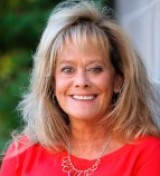 Traci has spent most of her career in insurance, beginning after graduating from University of Cincinnati. She married fellow west sider, Mike Bernecker, part owner of local business. She is passionate about fashion, wine and her three children; Christa, Coray, Michael and inherited sons: Scott and Austin. She came to Huesman Schmid in 2005 after being introduced to Norb by her father Nick Ruebel Sr. She was and is grateful for the opportunity. She loves ABC on Thursday nights and is an avid traveler. Lately, she spends a lot of her time chasing after her grandsons, Sawyer and Noah, both two. Speaking of two, Traci is looking forward to welcoming a new grandson and her first granddaughter in the Spring of 2021. That's right twins!! Boy, is she going to have her hands full!

Return to the staff page.