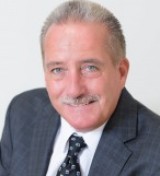 Paul Huesman, Jr. is an Agent/Producer after completing the State Auto Pacesetter training program in 2001 and became a Principal of the Agency in 2003. Paul also has valued computer experience, spending 15 years as Information Systems Manager for the Palm Beach Clothing Company. He has two children and 5 grandchildren (soon to be 6). He has lived in the Cincinnati area all his life, but also enjoys heading south and hitting the golf courses in Florida.

Return to the staff page.